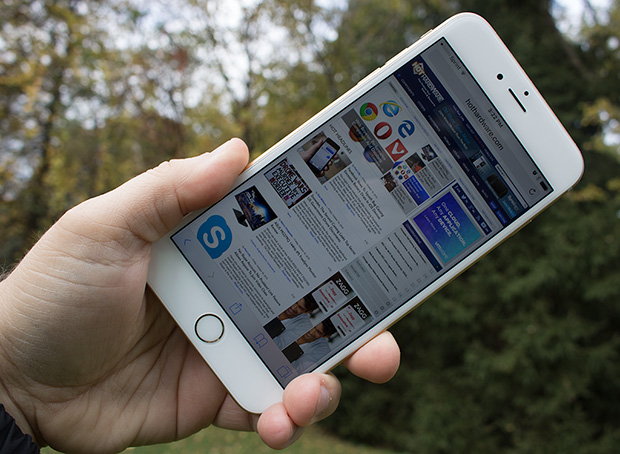 The wait is over. Few minutes ago took place the presentation of the iPhone 6S Plus, alongside the iPhone 6S, the amazing iPad Pro, its new 12.9-inch tablet, and the renewal of Apple TV.

With them on the table, we have defined the landscape of smart phones in 2015, except for the new Nexus 5 and expected Xiaomi E5.

The natural evolution of the iPhone 6 Plus follows the continuous line that Apple phones often show in versions “S”. Same design and appearance in its external shape and slight variations and improvements there in.

Of course, this new flagship Apple iOS hit the market with 9, the renewed mobile operating system the company responsible for rendering all possibilities of the device.

However, all is not simply 3 or 4 improvements, so let’s shelling completely features and specifications of the iPhone 6S Plus.

The external appearance of the new iPhone 6S Plus is perhaps the section that has less evolved over the iPhone 6 Plus we knew exactly one year ago.

Yes, your screen integrates interesting innovations as Force Touch technology feature it shares with the new 2015 MacBook and Apple Watch.

The iPhone 6S Plus and its new “3D Touch” screen is capable of recognizing different pressure levels , a touch, a slight pressure or deep pressure, etc … All this will be managed by IOS 9 and open a new universe of possibilities to integrate new functions to display the iPhone.

The response time of this new screen technology is, according to Apple, of 5 milliseconds. In the demo games that Apple has shown in the keynote he seemed really fast.

The other design features remain impassive in varying degrees. From its streamlined unibody aluminum case to its lower thickness to that seen in previous iPhone models in June.

The rounded edges remain characteristic protagonist of the design of this new iPhone 6. The lock button, on and off is still on the side, to have it more accessible.

More developments are found in the colors in the new iPhone 6S Plus will be available. In the known silver, gold and gray space joins the pink gold, which aims to be a bestseller among the female audience.

Naturally, the increase in power is another of the features of the iPhone 6S Plus, thanks to its renewed A9 processor.

The coprocessor M9 is responsible for controlling the compass, gyroscope, ambient pressure and accelerometer.

The fingerprint reader Apple phone is still there, stayed on the iPhone home button 6S Plus.

Of course, this iPhone 6S Plus offers free 4G LTE support up to 23 different bands, and the standard 802.11ac WiFi.

Perhaps with the passage of time, where before users seeking power and design in equal parts, it now appears that the photographic section of a smartphone is the most valued features when choosing a new device.

And we do not say, say it’s own companies in each presentation, where this section is of increasing importance.

For the presentation of the iPhone 6S Plus, the company has shown the innovations present in the Apple phone camera.

Again the camera returns to protrude from the housing. It seems that Apple likes this design, imitated by other brands but the average user does not finish convincing.

The rear camera iSight goes from 8 to 12 megapixel. However the rest of carcateristicas remain imposable compared to that seen last year.

With one exception: For the first time, the iPhone camera is capable of capturing videos at 4K resolution, joining other top model on the market.

As for the software camera, the iPhone 6S Plus also takes advantage of technology Touch 3D through “Live Photos” function that allows you to create short videos of each photograph.

With regard to the resolution of the front chamber will also improve, going from 1.2 to 5 megapixels. As various sources argued, this component includes a flash called Flash Retina.

The operating system of the iPhone 6S Plus was one of the few confirmations on the phone with which we had so far.

Among the novelties of iOS 9 highlights a new energy-saving mode that will extend the battery life of a significantly, an ideal to prevent the iPhone or the iPhone is turned off early solution.

It arranges for post disable synchronization, downloads and automatic updates, turn off some internal sensors and stoop even visual effects.

Another iOS enhancement 9 has to do with the organization of the photographs, which for some users is currently in chaos. From now on the Apple devices saved all the pictures taken with the front camera in a folder named “selfies” separate and screenshots from other images.

Siri, the personal assistant of Apple, also improves with iOS 9. The wizard will cover more topics and offer smarter answers, also in the search screen. From Cupertino expect the upgrade assistant Siri place over its two main rivals: Google Now and Cortana.

Both the iPhone 6S like iPhone 6S Plus EL12 may be reserved from September, but the official sale date is September 25.

Spain does not enter into these early release schemes, but hopefully before the end of years to reach all stores.