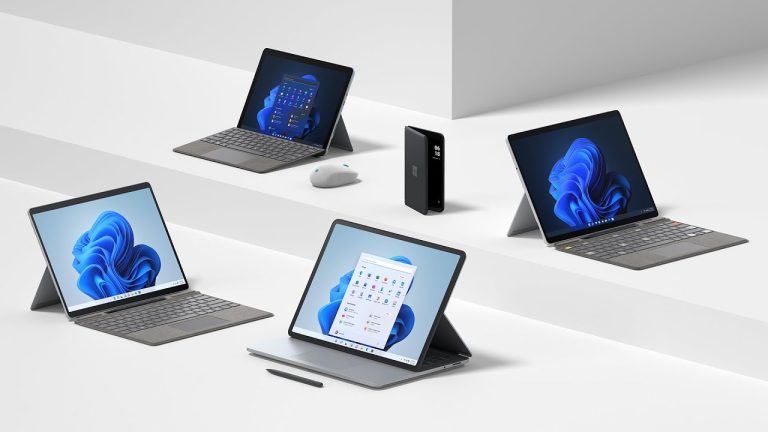 The company also updated its line of mobile Lumia and Surface Pro Tablet.

Microsoft continues to expand into the gourmet market of electronic devices. The company announced at an event in New York, its first laptop, as well as an update to its line of phones Lumia, a new tablet and a second bracelet fitness.

Undoubtedly the most striking event was the announcement of a portable entirely manufactured by the company. Under the name of Surface Book a ‘laptop’ riding a 13.5 inch screen with a battery life of 12 hours is hiding.

Magnesium finish, the ‘trick’ of the device is that the screen, combined with a backlit keyboard with a track pad glass can be separated it with a simple gesture, becoming a touchpad, with up to ten points possible, with 3,000 x 2,000 pixels and a density of 267 pixels per inch. Indeed, to accompany the display, Microsoft has also announced Surface Pen, an electronic pen that offers 1,024 levels of pressure and a magnet attached to the frame of the equipment.

In all cases, it has two USB 3.0, SD card reader and mini DisplayPort output. Two front speakers are responsible for bringing the user Dolby sound while the screen will have two cameras, one front and 8 megapixel rear 5, both capable of recording 1080p video.

In laptop mode, its weight is 1.5 kilos, while the GPU dedicated sum 65 more grams. As for the tablet, it stays in the 725 grams. It goes on sale on 26 October.

With regard to smartphones, Microsoft announced three new models with Windows 10 Mobile. The first two are the Lumia 950 and Lumia 950 XL, both with 32 GB of memory expandable to 2 terabytes using cards. The Lumia 950, with a Snapdragon 808 processor inside, has a 5.2-inch AMOLED screen WQHD with 1,440 x 2,560 pixels and 564 pixels per inch. Its battery, fast and wireless charging, is 3,000 mAh. Your XL version increases to the 5.7 inch screen and uses a Snapdragon 810 processor, while the battery is 3,340 mAh.

The Redmond company has introduced a new bracelet quantifying renews the device launched last year. It has an OLED display protected by Gorilla Glass 3, which will facilitate the user to read all GPS data, monitoring of ultraviolet radiation, calories and notifications. As Microsoft has indicated, this update is better integrated with Cortana, the voice assistant Windows 10, so it will be more powerful and easy to interact with the device.

Among the novelties, the Microsoft Health application saluz oriented, integration of a barometer to measure the elevation and VO2 max, a sensor that measures the maximum volume of oxigeneo that the body can absorb at a particular moment. It will cost $ 249 and will be available for iOS, Android and Windows, from next October 30.

Both devices equipped with 3 GB of RAM and USB connection Type C.

They are made of polycarbonate and have liquid cooling. The rear camera is 20 megapixels, optical Carl Zeeis, opening 1.9, optical and able to record video in high definition ultra stabilizer, while the rear camera has 5 megapixels. They will cost 549 and 649 dollars respectively and will go on sale in November.

A Redmond also played them renew the Surface Pro. He who announced Tuesday its fourth model is available from the $ 899 in its basic version. The tablet is now up to the 12.3-inch and makes reducing the frame, meaning it has the same size as last year and even reduce its thickness from 9.1 to 8.4 millimeters. The display protected with Gorilla Glass 4, has a resolution of 2,736 x 1824 pixels and a density of 267 pixels per inch and mounted the PixelSense technology, with 1,024 pressure levels, and supports Microsoft pointer.

The guts of the device have changed. It will feature Intel processors Skylake family, ranging from m3 to i7, and will configurations from 4 GB to 16 GB of RAM and SSD hard drives ranging from 128 GB to 1 TB. According to Microsoft’s performance it is 50% higher than a MacBook Air, but has not clarified what model, while autonomy is about 9 hours. The front camera is 5 megapixels and the back of 8. It will have also a USB 3.0 port full-size, one mini DisplayPort and microSD reader.

The new convertible tablets come in black, red, cyan, blue and dark green. The weight of the models, meanwhile, varies between 766 and 786 grams depending on the configuration, without the Type Cover also comes with significant improvements, like a trackpad 40% larger. The most expensive model will cost $ 2,199. They will be on sale from 26 October.